Suitable for Basotho, Xhosa, Griquas, Bergenaars, Afghan and Indian Irregulars etc. It is possible to paint the sheepskin as a leather saddle.

Supplied with 2 bullocks, a yoke, a cargo (2 earthenware pots, 2 grain sacks and 3 crates) and a matchlock-armed Indian or Afghan driver. See below for notes on assembly. 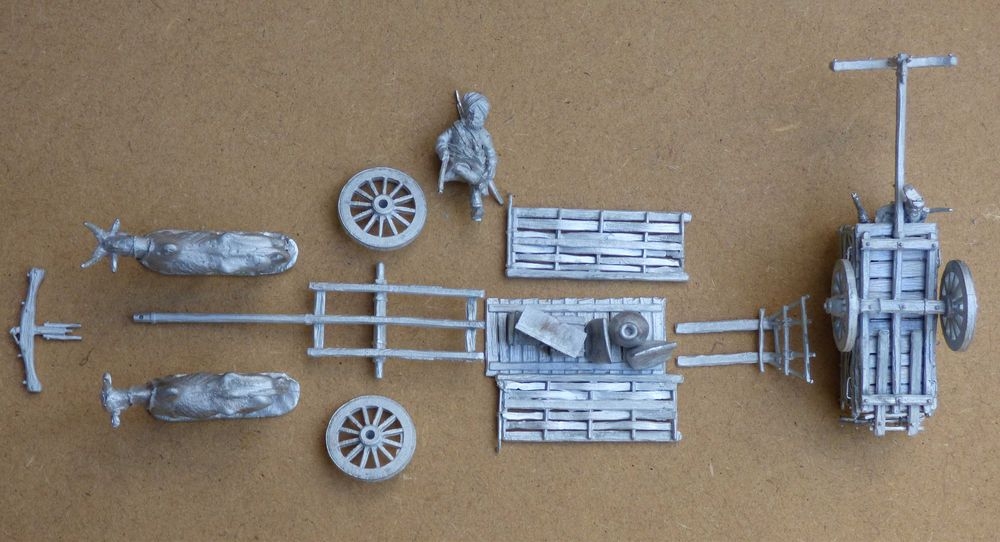 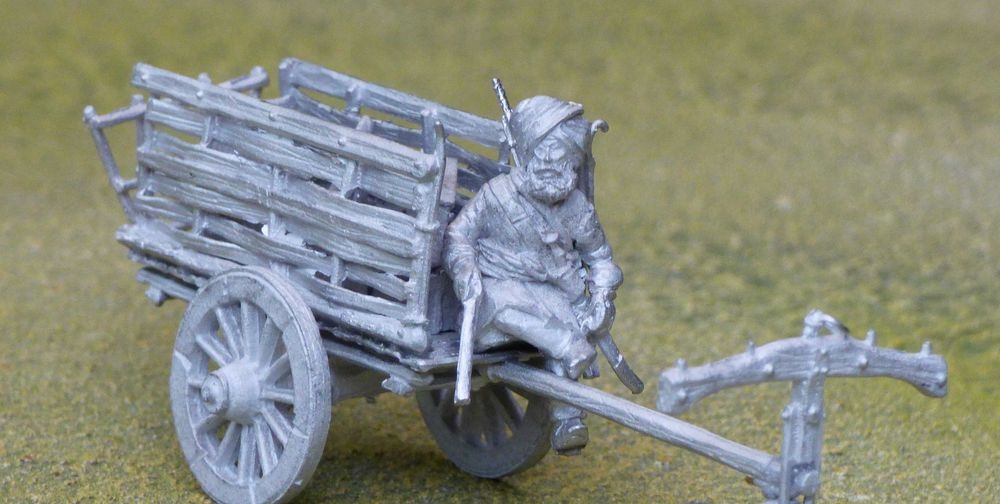 Click images to reveal. Left: Here we see the kit laid out, ready for assembly. Note that the planking running across the floor of the cart faces upwards, so that the two side panels can be glued along the outside edges of the planks. The hooked struts of the side panels go at the front of the cart, with the hook itself curving outwards. You might wish to consider placing the cargo as shown, with the long artillery chest running diagonally across the top of the two smaller crates, firstly, because it will make gluing the sides to the floor that much easier, by retaining the sides in an upright position while the glue sets, but primarily because it will provide extra solidity against any possibility of your gaming friends causing damage to your model, perhpas by picking it up by the sides and squeezing them in unthinkingly. The base of the T-bar yoke glues neatly into the small hole at the front of the draught pole. Once you have glued the floor of the cart to the top of the axle and undercarriage, you will find that there is now a recess at the rear into which the struts of the tail-gate assembly will slide neatly. Secure the struts to the undercarriage with a small blob of glue. Note that there is a second earthenware jar in the kit, which in this instance has been left out and set aside for other purposes, such as camp scenes etc. Right: To position the driver correctly you will need to seat him to the left-hand side of the pole, looking slightly to his right, such that his right foot is just resting against the draught-pole. For painting purposes note that he is seated on what can be imagined either as some kind of cushion, or perhaps more likely, a crushed down grain sack of the same colour as the sacks in his cargo.

THEM 3 Pair of walking draught bullocks, with cast-on heads, supplied with yoke. (£8.50).

Suitable for transport wagons and artillery limbers in India or Afghanistan, but not Africa.

The horse on the right, which is a great mainstay pose for unit-building, repeats in the set.

Suitable for artillery limbers and wagons in the Cape. Many other uses besides. In the real world mules comes in a range of sizes, but as draught animals with pulling power these are of the same stature as a horse; please don't buy them expecting to get something smaller.

Suitable for artillery limbers and wagons in any operational theatre.

Consisting of the cart and awnings, an Indian driver and a pair of draught bullocks.

During assembly the chassis needs to be positioned so that it protudes sufficiently far to provide a platform beneath the driver's feet. If it doesn't do this, you will probably have the chassis back to front. It's obviously best to test this out before applying glue.

Camel transport at the halt. Set consists of 4 kneeling camels, 4 baggage loads and a seated Indian camp follower. The driver is posed so that he could equally well be wilting in the heat or freezing cold, (during the Retreat from Kabul for example).

For finishing off your colour parties to perfection. Each code contains 2 pairs of finials and cords (4 items). This pattern of spear point finial was in service up to 1858, including throughout the eighteenth century and during the Napoleonic Wars.

Note that the colour cases are bored out at the bottom to take a pikestaff, but that for the usual reason there are no pikestaffs included in the set; i.e. because soft white metal spears or poles enjoy very poor survivability on the table top, making them more trouble than they are worth. We recommend instead the use of brass rod, available from most good model shops, or if not that then straight lengths of florists wire as the next best alternative.

THEM 14 Set of 4 Draught Horses at the halt, expressly for troops of the Bengal Horse Artillery.

Note that by leaving the poles on the third animal at full length the set will lend itself to a rocket battery unit, or otherwise you can cut the poles shorter to replicate tent poles.

Note that the horses in this set have ample room to seat riders clad in coats and other bulky forms of dress, as there is no rolled blanket or cape at the back of the saddle.

Suitable for Basotho/Xhosa/others besides. (NYA)

Suitable for Basotho/Xhosa/others besides. (NYA).